Radon Detected in 80 Per cent of Latex Products 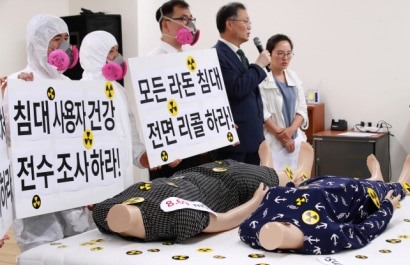 A new survey has shown that around 80% of latex products typically bought during overseas trips emit radon (Rn), which is a carcinogenic agent.

Several civil groups came together and held a press conference in July at the Sejong-no Seoul-based Central Government Complex to make an announcement regarding the results of a survey that was performed on 709 individuals who came from a community that had used radon-contaminated latex products before.

The results of that survey revealed that around 80% of the latex products that the respondents used were being suspected of radioactive contamination. Experts say that when you inhale radon over a long period, it can result in the development of stomach cancer (gastric cancer) and lung cancer (lung carcinoma).

All the respondents who had previously used the latex products were complaining of skin diseases, respiratory sickness, lung illness and thyroid-related illnesses.

When they were asked to give their opinion concerning future measures (many answers possible), 85% of respondents stated that the government should do an investigation into the levels of radiation in latex products.

Other responses included returns and refunds (71 Percent), investigation on the effect of the products on health (60%), legal compensation (56%), and a ban on household products that are contaminated with radon (51%).

However, the groups said that the number of latex products victims is rising because the materials of negative ion latex were used in producing beds. Consumers bought the products because they were relying on the government’s approval of the negative ions positive effect.

The activist groups are asking the government to start taking responsibility for the latex and radon crisis and start carrying out studies on the effects of latex products on consumer health.

Also, the groups are asking the government to collect latex products and make sure that latex isn't used to produce the household materials that are used every day in the future.

It's a smart radon detector that comes with Bluetooth as well as a data logger for you to use. The device can be used in the European market with becquerels per cubic metre (Bq/m³).

If you need a radon eye for measuring radon, feel free to buy at RadonShop. We sell the radon monitor known as RadonEye RD200 throughout Europe. Our RD200 is made in South Korea and has structured pulsed-ionisation that is twenty times higher in sensitivity when compared to the other handy radon detectors in the market. It also consists of two structured pulsed-ionisation chamber system plus a highly accurate detection circuit.
2018-05-28 04:20:002018-05-28 04:20:00 2018-05-28 04:20:00 2018-08-10 10:27:17
MZ recommends our Radontec Exposimeter for precise radon measurement

In the MZ Newspaper Article from May 10th 2022 our RadonTec Exposimeters are recommended for long-term Radon Measurement. The MZ reports that the unified municipality of Arnstein, was one of the...

Unusual radon levels came to light after we installed an underfloor extraction system in the basement of a customer in Munich. The cause was...

If elevated radon levels are detected in your residential or commercial building over a longer period of time, the question arises: Where does the radon gas enter and what are the next steps?

Also this week we had a run on our measurement devices - this time on the RadonEye RD200 since they were featured in the BR video from March 13th 2022! We at RADONTEC are RadonEye General Importer...

By selecting "Accept all", you give us permission to use the following services on our website: , , ReCaptcha, Facebook Pixel, Google Analytics (Universal Analytics), Google Ads Conversion Tracking. You can change the settings at any time (fingerprint icon in the bottom left corner). For further details, please see Individual configuration and our Privacy notice.